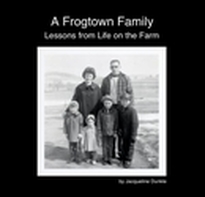 Born in 1963, Jacque was raised on a family farm in western Pennsylvania where lessons of the land settled deeply in her roots. Her many experiences of rural life, shared in the stories from her childhood in her book A Frogtown Family, have strongly influenced her life path and her work. With a background of over 30 years in the Beauty and Spa industry along with short side trip in the corporate world, Jacque's life is a testimony of living authentically.

Jacque graduated from high school in 1981 as valedictorian and attended Pittsburgh Beauty Academy on a scholarship. At the age of thirty she decided to further her education with a Business Degree maintaining constant Dean's List status. She also opened a large day spa and operated it with great success for twelve years before she sold the business to pursue a calling in the Healing Arts and Bodywork.

In 2010, her only child, Erik was involved in a life-threatening motorcycle accident in Wilmington, NC. The experience of becoming his patient advocate and the story of his miraculous survival as a paraplegic was so moving that she was inspired to write an award winning independently published book which poignantly validated her calling as an Intuitive Healing Coach - healing body, mind and spirit.

That calling continues, now in North Carolina where she and her husband have relocated to be close to her son and his growing family.